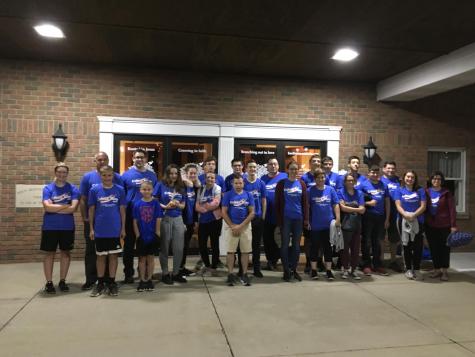 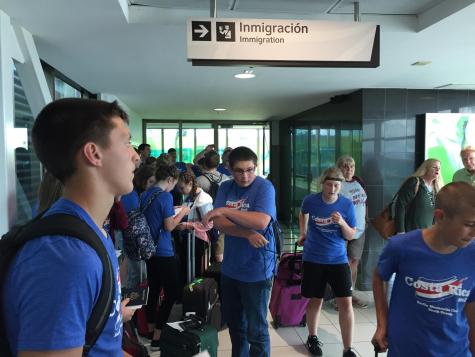 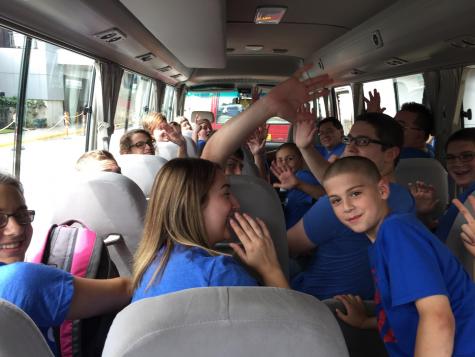 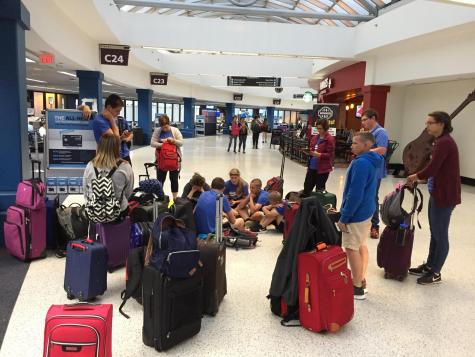 After a long day of travel, our group is settling into our hotel outside of San Jose, Palma Real. Isaac Troyer writes, "We started the morning off bright and early. We arrived at the church at 3:15 am and left for Cleveland at 3:30 for our first flight. We got a connection flight from Cleveland to Houston. We arrived in Costa Rica at around 2:30pm. After we arrived we got a bus back to our hotel, where we met  pastor Miguel and his wife Karina. They had sandwiches waiting for us for lunch. After that we headed up for some time to relax and time to catch up on some sleep. " I (Jeff) led a devotion on listening for God, reading from Elijah in 1 Kings 19:11-13. I asked the group, why do you think God chose to be not in the earthquake, but in the whisper? I invited the group to take time to listen to what God is telling them this week.

Miguel and Karina have been very hopsitable to us, arranging transportation from the airport to the hotel and providing us lunch and dinner. Sophie Miller writes, "Today we arrived in Costa Rica and received spectacular hospitality from Miguel and Karina. When we arrived they already had food and everything ready for us. That really meant a lot to me and everyone because it’s nice to have a good meal after a long day of traveling. Afterwards we chilled for a while and got settled into the hotel, and then they had supper ready for us. That was a very very good meal and it was so great how they take time out of their own schedule to make sure we are fed and doing well. After we ate they answered all questions and explained what will be happening tomorrow and this week which was great to know in advance."

For those hwo have never been to Costa Rica, it is a much wealthier country than Nicaragua. The average Costa Rican earns about $11,800 per capita, whie the average Nicaraguan earns roughly $2,150 US dollars. (In comparison, the United States economy creates a whopping $57,466 per capita).  How does this translate on the ground? Well, it means that Costa Ricans are comparatively better off than their northern Nicaraguan neighbors. The airport was new. Roads were paved and smooth. Cars are later models and in good shape. The hotel is comfortable. Still, Costa Rica has its share of challenges, for the group. Woody is trying hard to speak Spanish, and its paying off in laughs and interactions. Scott Bodiker, our strongest Spanish speaker, became our default interpreter for part of tonight. Everyone is enjoying pitching in with their tidbits of language; Emily Troyer reminded Scott Bodiker about the Spanish word for dress when he was discussing what our group should wear to church tomorrow.

Costa Rica is two hours behind Berlin, Ohio, and after a long day of travel, many have fallen asleep at 8PM. We've been treated well in our short time here. Tomorrow we will join Miguel and Karina at their church, Iglesia de la Ciudad, and then head out for a tour of San Jose!